Two things happened in 1971 that would change Orlando, Florida, forever. The first would be the opening of the Walt Disney World® Resort, the most ambitious resort theme park destination project of its kind.

The second would be the purchase of a private golf club just a few miles down the road, Bay Hill Club and Lodge, and the new owner, Arnold Palmer. We all of course know the role Arnold Palmer played in the growth and success of the PGA Tour, the game of golf, and sport marketing globally. What many people do not know is his impact on Walt Disney World® Golf.

In September 1971, with just a few weeks remaining before the opening of the Walt Disney World® Resort, Director of Marketing, Sandy Quinn, was asked to setup a PGA Tour golf tournament at the Walt Disney World® Golf courses. Quinn had no experience in setting up an event like this, but he knew who Arnold Palmer was, and he knew he had just moved into the neighborhood. 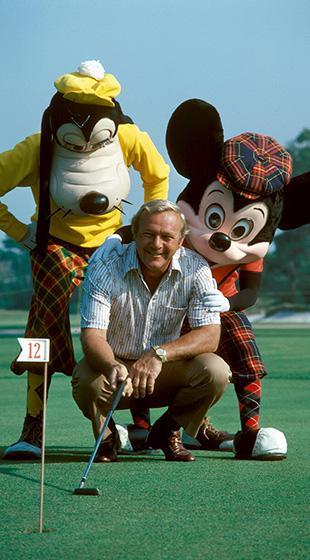 “I sent someone over to see if Arnold would come by and at least talk to us about it,” Quinn said. “Well, he came over, and we’re starting to talk, and then all of a sudden he looks off in the distance, curious about something. I walk over and see he’s watching the train engineers put the new cars on the monorail. Right away Arnold gets interested, and wants to know if he can take a ride. Well as luck would have it, the engineers were running a full scale test on the whole system that day — and they were delighted to have Arnie as their first passenger.”

We all said a small prayer, hoping the thing wouldn’t break down while he was in it! When he was through, we started talking a little about a golf tournament. ‘No problem’, he says, ‘Sign me up. I’ll call a few friends.’ And that was it. In no time at all, we had a full- fledged PGA golf tournament.

And as they say….the rest is history! The Walt Disney World® Open Invitational was held in December of that year and was won by Arnold’s good friend and most fierce competitor, Jack Nicklaus. Eight years later, Arnold would bring another PGA Tour event to Orlando when he convinced the PGA Tour to move what was then the Florida Citrus Open to his Bay Hill Club and Lodge, an event now known better as the Arnold Palmer Invitational.

As fate would have it, forty years later these two iconic partners would come together again. In 2011 the Walt Disney World® Resort and Arnold Palmer Golf Management signed a 20-year strategic alliance to operate and manage the golf properties at Walt Disney World®.

On June 10th, 2013 the Arnold Palmer Course Design team began a 6 month journey redesigning Disney’s Palm Golf Course. This classic tournament course was re-imagined by Arnold Palmer and his design team, and reopened in December 2013. Disney’s Palm Golf Course was awarded the Renovation of the Year in the resort course category by Golf Inc. Magazine the following year.

While many Disney guests have enjoyed the championship caliber courses over the decades since 1971, few knew how the relationship all began with Arnold Palmer’s curiosity of the monorail. Please see below the illustrious list of past winners of this event, 1971 – 2012.