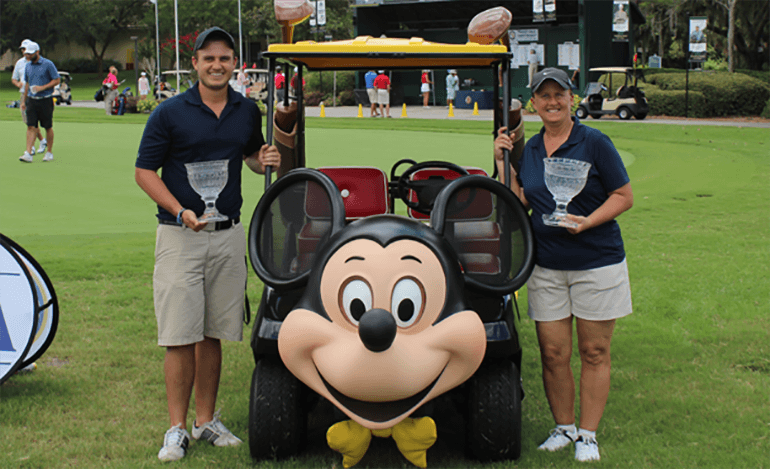 On July 22 – 23, we will be hosting the FSGA Parent-Child Championships, both the 18 and 9-holer groups:

The 18-hole event will be played on four courses, Disney’s Magnolia and Disney’s Palm golf courses, along with the Tranquilo Golf Club at the Four Seasons Resort Orlando and the New Course at the Hyatt Grand Cypress resort. This event will consist of 36 holes of a modified alternate shot format and will host up to 208 teams and 416 players. There will be four age divisions based upon the youngest member of each team and each team will play a two-course rotation over two days of play. The lowest gross score after 36 holes, within each age division, will be the Champion.

The 9-holer event will be played on Disney’s Oak Trail golf course, with three divisions, covering ages 6-7, 8-9 and 10-12. The event will consist of a 9-hole round played on each of the two days, for a total of 18 holes, using a modified alternate shot format. Up to 44 teams, with 88 players will participate with 8:30 am and 11:00 am shotgun starts each day. The scoring for the event will be a gross Stableford method and the highest score will determine the Champion in each age division.

On December 2 – 3, we will be hosting the Men’s Net Four-Ball Championship at Disney’s Magnolia and Disney’s Palm golf courses. This event will consist of 36 holes of Four-Ball stroke play, with a morning shotgun start on Disney’s Palm course on the first day, followed by a morning shotgun start on Disney’s Magnolia course on the second day. There will up to 52 teams, with 104 players in three age divisions, based upon the youngest member of each team. The lowest handicap adjusted net score in each age division will be the Champion.

We look forward to welcoming the FSGA once again to the “Happiest Place on TURF!”