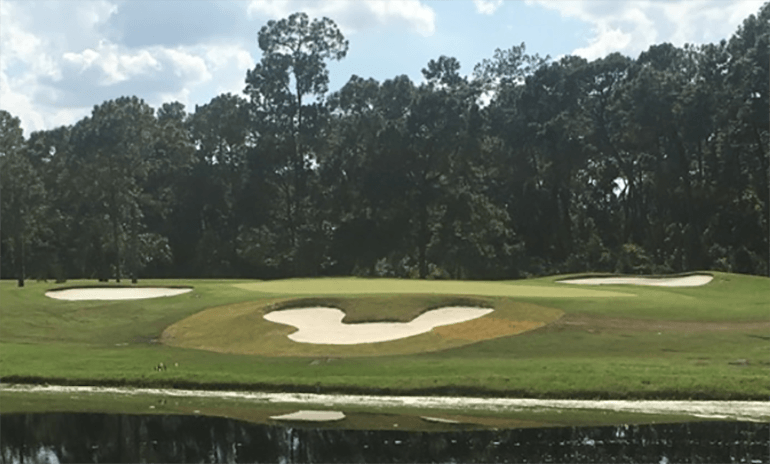 The bunker has been rebuilt numerous times over its history, most recently in 2013. The traditional method of bunker construction, which is subject to the detrimental effects of multiple factors including climate and soil conditions, can compromise the longevity of a bunker, requiring periodic rebuilds. These effects can result in the loss of the shape of the bunker and the sinking of the sand due to the erosion of the bottom of the bunker because of rain, despite the use of liners and tile drainage. That increases the frequency of required maintenance and the cumulative costs associated with bunker management.

This year, we elected to pursue a superior and an initially more expensive bunker construction method for the Mickey Mouse bunker, using Capillary Concrete, to invest in and better protect this important and iconic bunker over the coming years. Capillary Concrete contains large enough pores in the base material to enable expedited drainage of excess water from the bunker through the concrete into the drains, while preventing sand migration into and through the concrete. Polymers in the concrete binding agent create microscopic connections to enable moisture to be returned to the sand via capillary action, against gravity, upward through the concrete during dry periods. This keeps the sand conditions ideal for play, while dramatically improving the life span of the bunker as compared to traditional construction methods.

See the image sequence below for a sense of the multiple steps involved during the reconstruction.

The Mickey Mouse bunker now looks better than ever and will last for years to come!

We also want to give you a little preview announcement, which is that we have plans to construct Mickey Mouse shaped bunkers on Disney’s Palm, Disney’s Lake Buena Vista and Disney’s Oak Trail golf courses in the future. Keep your eyes on the blog for future updates!

We hope that you enjoy playing golf with us, as we continue to raise the bar on the Guest experience at Walt Disney World® Golf.