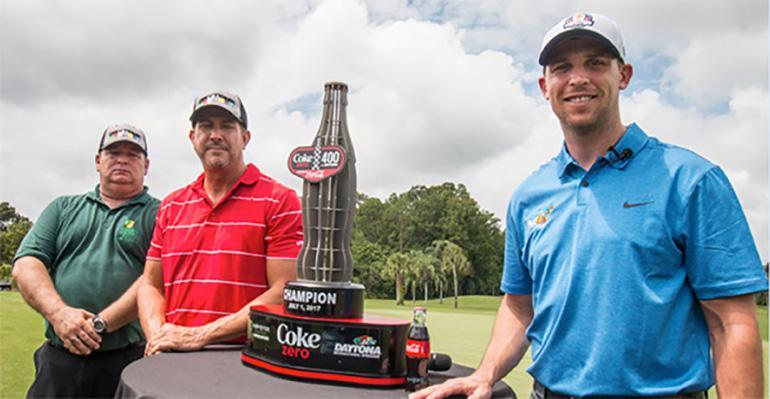 Denny, who is an avid golfer and the winner of the 2016 Daytona 500, is in Florida for the July 1, 2017 Coke Zero 400 Powered By Coca-Cola at the Daytona International Speedway.

“This is just a small preview for what Daytona does to honor military veterans,” Hamlin said. “I like playing golf and it worked out perfect to have a couple of these guys down and play a few holes with them.”

“It was awesome,” Rego said. “I had no idea [Denny] was such a great golfer.”

“I had a really great time,” Eason added. “I’m not much of a golfer. I usually go to the driving range. Denny was very cool and he gave me some great pointers.”

Afterward, Hamlin and the veterans spoke with media members at the Shades of Green Resort, an official Armed Forces Recreation Center (AFRC) located within the Walt Disney World® Resort. AFRC facilities exist to provide rest, relaxation, recreation and sustainment for military personnel, their families and other members of the Total Defense Force. AFRC facilities have been serving the nation’s service members and their families since 1946; the Shades of Green Resort opened in 1994 as the only AFRC in the continental United States.

Tickets for the 59th annual Coke Zero 400 Powered By Coca-Cola, the Coca-Cola Firecracker 250 and other Daytona International Speedway events can be purchased online at www.daytonainternationalspeedway.com or by calling 1-800-PITSHOP.