Pete Bevacqua, the CEO of the PGA of America, was interviewed on March 9, 2016 by Charlie Rymer on the Golf Channel’s Morning Drive Show and answered questions about the report and his optimistic views of the game’s future. 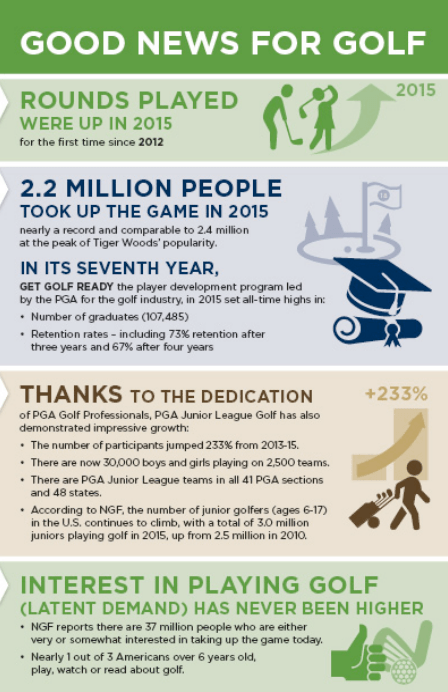 Key factors influencing the increase in play are:

This is exciting news for the future of the game of golf!

If you are a new golfer and/or have a junior golfer that is interested in taking up the game or improving your skills, Walt Disney World® Golf is committed to supporting you. We offer lessons, junior camps and our Player’s Club, taught by our PGA of America Professionals to offer a variety of instructional opportunities. Disney’s Oak Trail 9-hole walking course provides for a family friendly golf experience for new and junior golfers.

For the first time, we are providing junior golfers the opportunity to represent and compete on behalf of Walt Disney World® Golf in the PGA Junior League Golf program during the upcoming 2016 season! You can get more information and register until the end of April at https://pgajlg.sportngin.com/register/form/054123403.